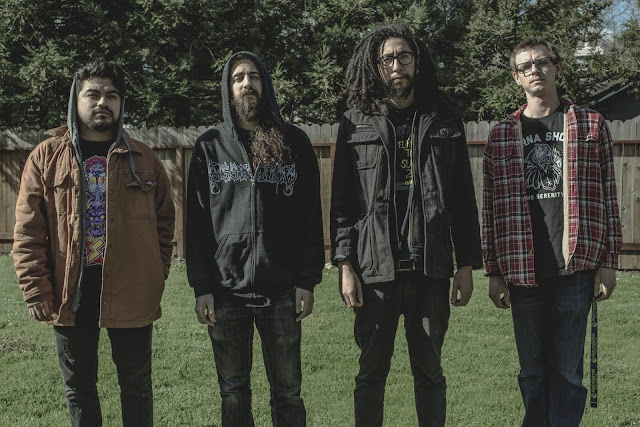 You can see Direnotes' review of Flub's self-titled album here.

So, what is the story behind Flub? How did the band come together?

At some time around 2011-2012 Me (Michael Alvarez) and Eloy Montes had both parted ways with our individual bands. We both spent several months just hanging out and going to shows and finding ourselves as artists, both writing our own solo material. At one point I remember one day it dawned on us that we should work together. We had a discussion of what we were aiming for as project and planned to build it piece by piece. First and foremost was the material. Eloy brought 3 songs to the table, to which I wrote vocals and lyrics for. During the recording process we found the name to the project and then released demos online and started burning cd's and bringing them to a ton of local gigs. From there we were on the hunt for a full line up. We found drummer Jared Klein through his previous project Enslave The Creation. Having played with Jared when I was in my first band, we had followed each other online after meeting at the show and one day I posted online looking for a session drummer for some of my solo material. Jared offered his services and came to Sacramento to track my material, and the whole time he was in town he hung out with me and Eloy and got a good listen to the Flub demos and was interested in the project. We asked him if he would join and he accepted. From there we needed a 2nd guitarist and bassist. We first asked a few other dudes in the local scene if they were interested and had several people try for the parts, but ultimately we first acquired Charles King, an ex bandmate of Eloy's previous project, and David Kloss from the Sacramento tech grind band Flower Violence. Over a few months later David stepped down from 2nd Guitar duties and we had acquired another guitarist named Viktor Hansen. After this current line up, several years later we parted ways with Viktor and Charlie and acquired a fellow band mate of Jared's Matthew Mudd of The User Lives.

Would you say your songwriting process is different than any other projects/bands you've been part of?

I believe so yes. Flub has a pretty laid back process of writing that's very challenging and comfortable in it's own way. In previous projects we would sit down and write together day after day and just go based off of how well we could remember what we wrote and it'd eventually develop into different ideas. With Flub, the music is majority composed by Eloy Montes and tabbed out on Guitar Pro. To which our drummer Jared Klein adds his own spice to the drum ideas, Matt doing the same with the bass lines, and myself being left open to do whatever I want vocally really. I feel we all enjoy each others work and if there are any changes wanted it's never a big issue, more of just a suggestion that we can elaborate more on.

Did you face any difficulties when it came to song writing?

I myself personally did when it came to vocal concepts as well as placements of vocals. I wanted to explore a new realm of my own voice and see what I could do on the album that'd push my boundaries and use every voice in my repertoire. As well as making the lyrics stand out from one another.

What would you say was the greatest moment in Flub’s history thus far?

There has been tons of defining moments in the bands history, but I believe one of the biggest has been the completion of this album. For a moment it felt to all of us that it would never be finished. Now it's getting the release it deserves and all the hard work we put into it can be heard by the world.

On the other hand, has there been any difficulties?

Difficulties were definitely there. In the last 4 years the album process was haulted due to personal living situations, line up changes, owing our studio engineer a shit load of money, doing other touring projects and fill-in gigs, there were times it seemed like Flub would be done and that the album would be left behind.

Some of your pet peeves when it comes to today’s metal scene?

Having to be overly serious about being metal. We ourselves enjoy not looking like a "serious" metal band because we never really were serious people to begin with.

What would you say the best thing about the scene is?

It's like a giant family. It reminds me of some really dope ass Comic Con event but more intimate with people who all dig some dope tunes

What does Flub do in their downtime?

Work to pay the bills and plot the next moves for Flub to one day conquer the world.

And, what is the least metal thing someone could catch the band listening to?

Probably anything from Ace of Base

What can listeners expect in the future from Flub?