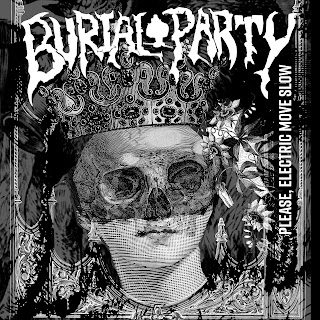 Life sucks, everyone knows it. So, if you need to complain about it - might as well make it good right?

(I can't believe how passive-aggressive and cynical that sounded. Oh please, god help me.)

Burial Party borders on so many closely related subgenres, I wouldn't dare try to straight-forward label them. In fact, you really shouldn't judge something like this strictly by the genre when going into it. However, for those curious: you'll get a lot of punk, a bit of hardcore, and some pop sprinkled here and there. It invokes a lot of memories for a older fart like me, who has went out and saw his fair share of hardcore/punk bands back in the day - in a whole lot of basement level bars.

A whole lot of aggression shows through in the tracks here, simple riffs played hard with pretty minimal effects. You can clearly hear the guitar and bass strings being abused at points, hearing the pick thwang against the strings is something I haven't heard in recorded music since... well, I hear it in black metal, but not in something like this. Slower, either more energetic or dissonant bits make up the other fifty percent of what's going on here. It gels together pretty well though, especially considering the band was formed on the tenets of common life being tedious and monotonous. You can really feel the displeasure and even a bit of disparity towards the subject matter at hand.


I think what really helps is that there is a pretty down-to-earth aesthetic going on with the recording of Please, Electric Move Slow - being that the album has been recording directly to tape. And, don't get me wrong. I'm a fan of technical wizardry and clever electronic effects as much as the next guy (or maybe not so much), but this technique adds a unique feeling to these tracks. For me, it makes the dissonance feel more natural and part of the music - rather then some intentional effect. Some moments, such as when singer John Cheesebrew makes some distance from the mic, drum up the sense that you could be in the same room as the band itself. It's quite effective, but not too surprising seeing that Collin Jordan handled the mastering on this one - no doubt, his experience with bands such as Voivod helped bring out the most with Burial Party's music.

As Burial Party is continuing to write and record, supporting this EP with shows around the Midwest, I'd be interested to see what this band has in their future. While four good tracks are a good indication, it's never a clear one. Variety has always been a problem with bands like this, sadly. Something usually balanced by the concise nature of each song. Though, I'm sure maybe this band might have it handled. Honestly, I'm ready to be blown away. A whole album recorded directly to tape? I would love to see it happen. Thwang. Thwang.