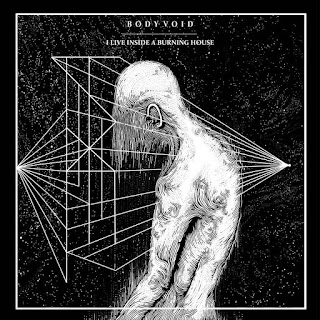 Gritty, meticulous, monotonous. No doubt words that will come to mind upon hearing the most recent release from San Francisco sludge outfit BODY VOID. High off their debut album Ruins, the band seems to have found the appropriate root to define and solidify their sound.

Refreshingly, BODY VOID does not rely too heavily upon the typical grinding fuzz that a fair amount of sludge metal bands lean back on (not to say that I don't enjoy that sort of thing). Most of that is saved for the bass, which heavily reminds me of a similar style used in groups such as Triptykon. Paired with a rather simple, but highly effective, guitar sound the band has managed to create a sonic landscape of despair - a necessity for a band who chooses to name their album 'I Live In A Burning House'.

Not unlike other underground Sludge acts, BODY VOID seems to love the effect of having their music 'fall apart'. As in, by the end of a particular section or song, the music begins to sound broken - guitars squeal, drums tense up, and, of course, the bass continues on with it's droning simplicity. Luckily, a bit of this is balanced with somewhat faster, almost punk-like sections and vocals so shrill and caustic that I dare to label them as blackened.

With some utterly massive tracks, BODY VOID has put forth an offering to be reckoned with. This is, no doubt, one of the best sludge releases of 2018 thus far. Though, if given the chance, 'I Live In A Burning House' may capture the interest of more then just fans of the sub-genre.