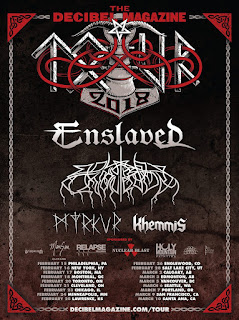 First of all, my sincerest apologies go out to Decibel Magazine, Enslaved and Wolves in the Throne Room. Regrettably, due to circumstances beyond my control I was unable to attend this performance in its entirety. However, I was so incredibly impressed (and at times moved) by what I did manage to see that I have decided to offer up my thoughts regardless. I hope you don’t mind me taking a few moments to share my unforgettable experience, such as it is.
We arrived at Vancouver’s legendary Rickshaw Theatre in time to witness Denver, Colorado’s doom bringers Khemmis absolutely killing it. Since I first learned that I would be reviewing this show, I was very excited at the opportunity to finally see these guys live. In my opinion, Khemmis stands at the forefront of their chosen genre and did not fail to deliver on their unique brand of harmonized metal. The sound was second to none and the dual guitar work of Phil Pendergast and Ben Hutcherson cut through with little effort. Focusing mainly on tracks off their third release, “Hunted” the set was executed with poise and precision. 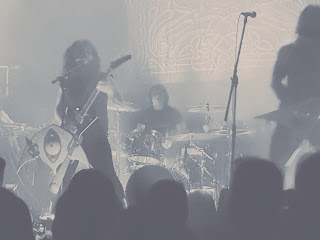 Hailing from Denmark, the ethereal Myrkur took the stage next. A brilliant backdrop emblazoned with the band’s logo was raised as spectral lighting brought it to screaming life. What a great visual-simple yet effective. The band specializes in a distinctive, blackened sound that provides a powerful foundation for Amalie Bruun’s lofty vocals. Her immense voice brought back memories of seeing Rose Chronicles play at the now defunct Town Pump back in the late nineties. Especially in her higher register, Bruun’s tones literally bounced off the walls and resonated in a way so striking everyone stopped in silence. “People in the back, are you relaxed? I hope those seats are comfortable”, the Danish artist mused as she broke out a handmade frame drum and began an Old Norse traditional song. Paired with her drummers’ evocative, pounding backbeat, the tune came across strong and proud-a fitting end to an evocative set. 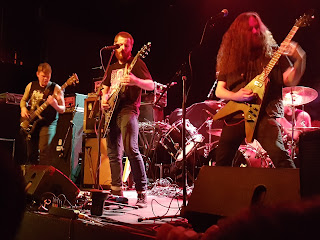 Before Wolves in the Throne Room took their places on a very well primed stage, a pre set makeshift smudge ceremony was held. Having already adorned the stage with mystical set pieces, the crew vacated the area to allow one of WITTR’s lead guitarists to cleanse the vicinity. And what an atmosphere it created! Densely spiritual and steeped in mystery (not unlike WITTR’s music), the audience was left captivated and intrigued. Outside of Pagan ritual, I’ve never seen white sage used in such a mesmerizing manner. Stage presence is definitely a strong suit with Wolves in the Throne Room. As band members took their cues from front man Nathan Weaver, the opening acoustic strains of “Born from the Serpent’s Eye” rang out. Wow. Once the song’s blackened leads began, an enormous pit broke out and sent me flying! I hadn’t been knocked off kilter like that in years and it felt amazing! Note for painstaking note was played to perfection and I was left utterly speechless. Easily my favorite track off of “Thrice Woven”, I couldn’t ask for a better gift.

All in all, this was an extremely memorable show and each artist presented themselves with poise and professionalism. If you are lucky enough find tickets to the last leg of the Decibel Tour in your city, my advice is to jump on it. You’ll be hard pressed to find a show this good for some time. Failing that, try to find headlining dates with any of the featured artists and without doubt purchase their music and gear. You will not be disappointed.