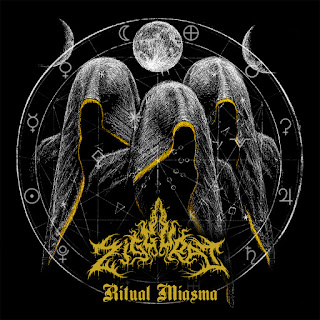 Musically, Ziggurat's Ritual Miasma seems to hit the mark with clinical precision. There are almost no mistakes, nor much error, to be heard here. It's exactly what you'd expect from something that calls itself 'Blackened Death' and the EP is so brief that you aren't exposed to any noticeable band quirks. But, this also means you don't get a whole lot of band traits either. There is no doubting the overall quality of Ritual Miasma, but perhaps it can be a little too by-the-numbers. Especially in the realm of experimentation, as the group has merely only went as far as mixing genres, rather then do anything distinctive or noticeable with them. There just simply isn't anything here that would make me think 'Hey, that's Ziggurat!' if I was to listen to it sometime down the road. A little bit of muck, a little blip, or shred of human error would have went a long way here. There is no tone or atmosphere, no depth, I am just being told by the vocalist that this is a big bad scary album, etc - It doesn't make the EP bad, or poorly constructed, but it makes it somewhat forgettable.

Ritual Miasma doesn't quite mate the genres of Death and Black metal together, such as bands like VAMPIRE or Whipstriker - but, it instead seems to consist of certain elements the band has taken and pieced together in a way that feels right. It's got plenty, and I mean plenty, of Black Metal tropes throughout it's short length, and a fair amount of Death when it comes to clarity and vocal style. However, I can't help but feel like it doesn't quite fall on either side. The 'Black' metal elements are lacking the sizable amount of distortion that is usually found within the genre, a lot of it is about enormous hideous waves of sound - cleaning it all up is a extremely odd choice. I just don't feel like it has the same overall effect. On the flip side, the 'Death' elements are mainly saved for vocals and making the blackened stuff feel slightly more chuggy. It makes everything feel a bit... Frankenstein. Like a lot of the bands favorite elements from these genres were chosen, incorporated, as something Black AND Death but not Blackened Death. It doesn't feel new but it's not unacceptable either, just really straight forward and expected.

I can't go without mentioning Ziggurat's fondness for blast beats. In fact, I'd be hard pressed to find many other albums or EPs I've covered that feature this much drum-kit abuse (R.I.P. drum-kit, though). I can't exactly place how I feel about them, not because they sound bad, but because blast beats like this are heard quite a bit on the very raw, primal, sort of black metal you find on some cassette labels - only this drum work is all properly mastered, extremely clear, and doesn't quite feel like your brain is frying due to the sheer volume of the high-hats. It's a clarity that almost feels a little perverse, in some odd way. Perhaps, because of my troubled love towards raw black metal. Way to make me feel conflicted, Ziggurat.

Again, Ritual Miasma isn't really bad in any way, Ziggurat seems to have a lot of potential. If a band's work is it's child then this one is a beast, but if it's one of natural conception or cold hard experimentation... well, that is something I can't quite pinpoint.