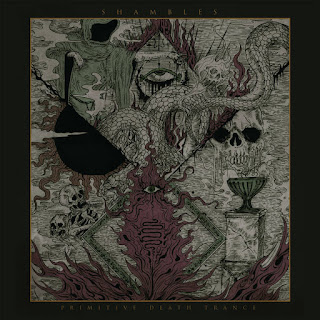 Since 1997, Thai grind core mainstays Shambles have continually put out brutal slabs of doom heavy demos (and even a full length release, 2016’s Realm of Darkness Shrine). With a particular emphasis on brutal, Shambles delivers yet another relentless offering in the form of Primitive Death Trance.

As a four song EP, the album is deceptively short but quick to make its point. The band makes no bones about what they came to accomplish-total aural submission. While certain tracks appear to beat an idea to death (see album opener, “Daemon”); the EP stretches each song’s limits creating more of a full length feel. It’s something Shambles does incredibly well.

The deeply resonant guitar tone Issara Panyang brings to the table is nothing short of jaw dropping. He really manages to lay down some seriously low end here, evident especially on the title track, “Primitive Death Trance”. Not to be outdone, percussionist, Thinnarat Poungmanee adds his own unique flair to the mix courtesy of his distinctive cymbal work. His ride shots ring out so clearly you’d swear he was playing in the jam space next door.

Essentially, Primitive Death Trance is a purists’ album. Forget about technical prowess, if you’re looking for the next Animals as Leaders you won’t find it here. Chord to chugged chord progressions are the order of the day for Shambles and they seem content to keep it that way. There are no frills to be heard on this release which are at times to the production’s detriment. Things get off to a muddy start sonically from the outset and the dense mastering leaves little room for clarity. On one hand, this makes for a challenging listen yet on the other generates a healthy dose of heavy.

All in all, where Primitive Death Trance lacks in originality and studio chops it more than makes up for in unrefined integrity. However, exposure to bands like Pissgrave and Necrot would do Shambles and their sound a world of good. Sometimes, less is more but finding that happy medium somewhere in between is more often necessary than not.

Do their songs need work? Yes. Is there room for improvement? Definitely, but at least they’re out there doing it. In a country not exactly known for its contributions to the metal world, Shambles is staking their own claim. And that is something I can get behind.