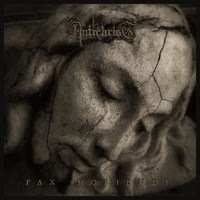 If you’re going to be blatantly blasphemous in a predominantly Christian country, you had better be able to back it up. Doom heavyweights, Antichrist, do exactly this on their crushing debut LP, Pax Moriendi. Hailing from western South America, Antichrist has been raising the finger to mainstream religion since 2004.

Navigating Peru’s murky metal underground with a series of self-released EP’s (Thergothon, Unholy and Winter), Pax Moriendi appears to be the band’s bleakest offering yet. I had to remove my headphones and play Pax Moriendi through loudspeakers to fully appreciate the depth and scope of this massive sounding record. I figured my neighbors would thank me me for introducing them to some new world music, especially since we’re treated to their homespun renditions of Johnny Cash and Buddy Holly on a regular basis. It’s the very least I could do.

With its eerie introduction, “Forgotten in Nameless Suffering” threatens to alienate even the most diehard listener. This notion is quickly dispelled, however, once the song itself actually opens. Intentionally slow, sludgy riffs are laid down thick and grimy courtesy of guitarist, Zaren and pave the way for Agalariep’s inhumanly guttural vocals. The low end utterances of “Hacked Up For Barbecue” era Mortician come immediately to mind as Agalariep chokes out mangled growls like bitter wind gusts in a graveyard. I envision the very stone of Christ’s tomb being painstakingly dragged away as the track soldiers on. Taking cues from doom pioneers, Grief, this is as deliberate and as mind numbingly punishing as it gets.

The all pervading ominous overtone continues and is even amplified through tracks like “Obscurantism” and “In the Dark and Mournful Corner”. The latter features Antichrist at their most subtle. The piece plays like a movement, effortlessly flowing from one section to another. Dual layered guitars and choral swells lend a welcome arty feel to the mix. At one point, I nearly leaped out of my skin as spoken lines obscured by daunting distortion reared their ugly heads. Jump scares are just one of many bonuses one can expect while listening to Pax Moriendi in the dark.
Album closer, “You Will Never See Sunlight” is as cheerful as it sounds. By this point, f you were looking for sunshine and roses your delusions should be all but shattered. Impossibly slow and purposely brooding, this is the perfect conclusion to an already weighty work.

Again, Antichrist makes liberal use of atmosphere here in the form of naked piano and hoarsely whispered lyrics. Truly haunting, this is a memorable memento worth sticking around for.
While certainly not for everyone and not exactly suitable for every occasion, Pax Moriendi is a welcome distraction in a world gone completely insane. It is a relentlessly cruel effort that is equally as inspiring as it is dissident. There really isn’t any getting around it-this is a must have for any fan of overwhelmingly brutal music. If Antichrist is any indication, Peru is well on its way to international recognition on the frontlines of underground metal. It’s about time.