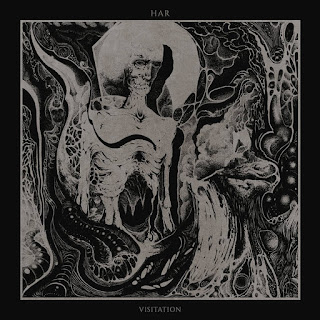 First off, Visitation’s intro is as creepy as they come. I’ve grown used to patiently waiting through some pretty lengthy prologues in my time but this gets to the point immediately. It features an instrument native to HAR’s homeland of Tel Aviv that while completely unknown to me, grabbed my attention straight away. It sounds to me like an arghul played in a drone like fashion, layered with haunting funeral bell and steeped in a mire of guttural groans. Weird and slightly disconcerting, it sets the scene for a relentlessly blackened EP that delivers at every turn.
Album opener, “A Shadow Henosis” is a cacophony of dissonance consisting of disembodied wails, foreboding guitar and outright ruthlessness. The mix is both terrifying and transporting. Evoking images of desolate lands and ancient evils, HAR have unearthed a timeless ambience with this track.
The diversity continues with the aptly titled, “From the Blood of a Whirling Dagger”, a decrepit whirlwind that features the dual face melting tactics of guitarists Daniel Atai and Shaul Pollack. From the outset, this song absolutely pummels with furiously paced blast beats and above average vocal work.
Closing on a high note, “Conjure the Black Flame” comes screaming out of the gate with all of the vengeance of a stirred Balrog. I’m hard pressed to find fault with any of HAR’s musical choices on this track as it is crafted with all of the diligence at their command. Again, the ethereal shrieks and howls trademark of Visitation return here and add a depth of hellishness to an already ominous vibe. With its ambitious intent, the song is quite simply brilliant and leaves little room for debate.
What I appreciate most about Visitation is its varied tempos, mid range vocals and almost complete lack of ego. This is raw black metal at its finest. Despite its overall top notch production, Visitation still manages to come across as unrefined as the best in its genre. This is no small feat considering the specifically lo fi demands of purist listeners. In a time where cassettes are being recorded in dank basements to decidedly minimalist effect, this is a welcome change. It proves that today’s generation of black metal can be just as sinister sounding as its predecessors without sacrificing tonal quality.