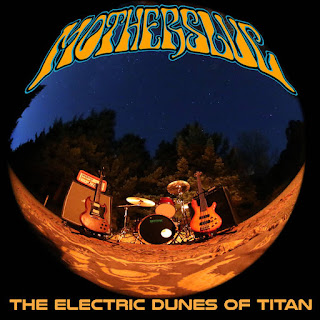 It feels like some serious talent has been seeping slowly out of Australia, and finally becoming available to us knuckle draggers overseas. First I was able to experience the likes of Arketh, and now this? 2018 is truly getting off to a good start. One can hope that this pace is kept, and that more of these Aussie bands find their way out the woodwork. And, hopefully, into my inbox.

Unlike Arketh, Motherslug is a doom/stoner metal band. They are no strangers to the subgenre, and a good bit of maturity and growth has been seen from their original EP until now. It's taken a good while for them to branch out from their rock-infused sound and onto something like The Electric Dunes of Titan, the band has seemingly spent a good amount of time defining themselves, and has finally become something far less inspired and far more original. While their rock-like beginnings are somewhere amidst the lines here, the band has decided to take a dive into more prog-rock inspired waters - a welcome change, not only for the band but also for the subgenre as a whole.

Fuzz and crunch are aplenty here, but so are some unexpected and wholly interesting twists. Songs like 'Downriver' and 'Staring at the Sun' provide a weary road worn look at the cosmos. Seemingly from the perspective of some tired old traveler who has seen all the universe has to offer, only to become disenchanted by the entire experience. Stories like this really make the album shine - not only because they are lyrically engaging, but also because Motherslug knows how to back up a good idea with solid compositions. 'The Electric Dunes of Titan' is most likely the best intro track I've ever heard on a album, kicking things off with a strong, highly effective, atmospheric guitar piece that really helps to put your mind front-and-center when it comes to the 'weary spaceman' theme of the album. Of course the track is full of enough fuzzed-out bass and guitars to satisfy even the most hardcore doom/stoner metal fan. The prog elements aren't so rare here either. Motherslug provides slow methodical sections, atmospheric interludes, and clean sections that pair well with even the heaviest and speediest of riffs the band can offer - its the kind of added variety I can get behind. After a while, this begins to feel like everything that Motherslug has been amounting to over the years: a finely developed doom/stoner standard, rife with tried and tested experimentation.

Gripes are minor, mostly to do with the vocals at times. While they work and ultimately the good parts far outweigh the bad, there is a fair amount of classic styled vocals here. Sometimes The Electric Dunes of Titan feels very much in the vain of bands like Sabbath or Saint Vitus, so those who've come looking for something along the lines of Mastodon or Baroness might be better off looking elsewhere. Personally, I enjoyed everything Motherslug threw at me. Vocals, themes, and all. It always seemed to fit the bill when it came to theme and song flow.

There isn't much else to say, mainly because Mother Slug's The Electric Dunes of Titan is such a competent and well constructed album that... it's just good. Don't believe me? Hear for yourself. You'll find yourself hard-pressed to find anything else like this, and to not give the album a second listen.