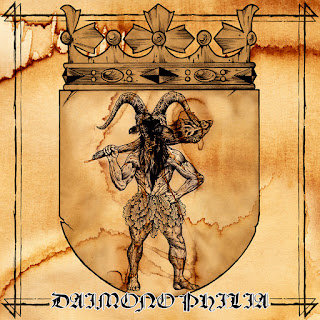 One of my favorite things about Black Metal is the dense and often impenetrable atmosphere it rarely fails to invoke. Every artist in the genre that has found their way onto my turntable, while remaining unmistakably black always manages to forge a unique and ethereal soundscape. Helsinki, Finland’s Lord of Pagathorn is no exception.

On this their second full length release, the band enters in style with an intense acoustic number entitled, “Intro: Neitzscherion”. We realize immediately that guitarist Corpselord is no stranger to writing intricate, well crafted passages. As a lone funeral bell lingers above the piece, the scene has been set for a striking work to follow.

“Evil to Destroy Evil” is an obvious choice to kick things off. Pummeling double kick rumbles throughout as distinctly tormenting guitars warn of an album ripe with innovation. Especially notable here are the brazen, searing vocals dripping with venomous reverb. I truly appreciate the high register howls that come slicing through with meticulous conviction.

Carrying the torch now comes, “Ghosts Among Us”. Continuing in the same darkened vein as “Evil”, this track comes on with authority and malice. The band pulls no punches here and punishes with a vengeance rarely found in metal today.

This sentiment is extended into “Prayer of Desecration”, where the tempo is deceptively slowed at the outset. The respite is short lived; however, once a torrent of grave guitars is unleashed upon unsuspecting ears. Again, I am amazed at the expert production at the hands of recording and mixing engineer, LL. The song even features a brief but welcome obscure chant in the outro.

Like a shark nipping at its prey, the first half of Daimono Philia seems to toy with us with its deceivingly familiar flourishes. The, daresay, thrash influence that permeates “Rise of the Celestial Scythe” and unrelenting severity of “Builders of the Higher Places” lend completely unexpected twists to the overall shape of the album. Naysayers be damned! These tonal changes fit in perfectly with the flow of the material. The element of surprise is reigned in tastefully as “Rise” gives way to ambient backdrops and classical guitar segues. I’ve yet to hear a black metal band switch up techniques this varied within the framework of a single song. By far, this stand alone track showcases Lord of Pagathorn’s songwriting abilities brilliantly.

The impressive thing about this band is their ability to summon the traditional voices of contemporaries such as Marduk and Immortal while maintaining a vision entirely their own. Evident especially in “Spiritual Spiral Stairs”, Lord of Pagathorn proves once again their capability of embracing orchestral movements. This natural pairing provides an epic resonance that fills out the sound considerably.

A chilling, despondent invocation draws us out of the shadows and into album closer, “Throne of Lucifer”. Here we are hauled helplessly through the murk of a down tuned dirge, and for the first time the chorus screams are brought down to mid-range, exposed in all of their raw splendor.

All told, this is a solid effort put out by a solid band. There’s really no denying the skill and fierce technical prowess of Lord of Pagathorn. I would advise any fan of the dark arts to dust off their ritual garb and invest in a hard copy of this extreme and vastly important album.