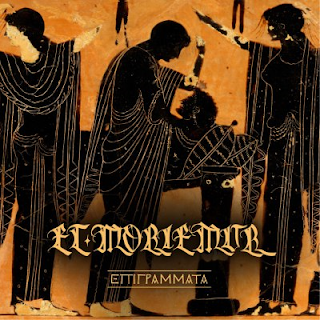 Featuring members of Dissolving of Prodigy, Self-Hatred, and Silent Stream of Godless Elegy - the Czech Repulic based 'supergroup', Et Moriemur, aims to pull in all manner of artists and talent from across a bevy of genres. Amazingly, it all seems to be in the hopes of creating a singular extreme metal masterpiece.

Initally, I was a little weary of the idea of a 'supergroup' album, I've seen many come and go with all the staying power of a compilation (and I've worked on a compilation, I know how fast they can fizzle into nothingness). Not to say any specific 'supergroup' is bad, but sometimes they don't come together as desired - and a good amount of the time, the multiple fanbases don't exactly bite. But, Et Moriemur has toppled all my preconceptions and expectations in a multitude of ways. Not only does this all feel like one cohesive whole but. for all the negativity I have towards the tired use of piano, acoustic guitars, and the like - this group simply trashes the idea completely. Not only does Epigrammata feature excellent use of both, it manages to blend traditional and exotic instrumentation upon orchestral elements; slow funeral-esque blackened sections, so slow it hurts, followed by simplistic but meaningful acoustic guitars; sorrowful black metal vocals paired with harrowing spoken sections. The convergence of all these elements feels right. Alone these elements may be good, but together, here on Epigrammata, they come to form something far greater.

Worries of light metal inclusions were immediately tossed aside as well. As everything on the album seems to be on a very similar level with volume, panned accordingly, and space put where it belongs (i.e. the endless, unforgettable chorus work and chants) this allows for the blackened elements to shine. As black metal tends to aim for a older, odder, sound - it seems to fit well with this motif of the old and ancient that is present on Epigrammata. The long, drawn out chords seem to fit the bill when it comes to proposed doom elements. However, the album quickly outgrows it's initial intentions in favor of flare and variety. Songs become far more then experimental blackened fare, and, at times, complete unpredictable. Seperate vocalists exist here, providing a multitude of different styles to the mix to better compliment Epigrammata's massive scope. Surprisingly, it works.

Problems do exist, as with anything so great. Because of everything else going on within the album, I often completely forgot about the guitars. At times they are good, and add some color to the compositions, but sometimes they were just hidden somewhere behind all the effects and chanting. It's like I was too busy listening to the distant subtlties to catch them. I feel like, maybe, this was because they were toned back somewhat. If the guitars were too loud here, or too busy, I may not have caught what was going on elsewhere. But, as a metalhead who likes his guitars, I'm left wanting.

Yet again, the likes of Transcending Obscurity have truly lived up to their chosen name - plucking the most unique metal from across the globe and bringing it to light. Et Moriemur is, by far, a gem so epic in scope and execution that it should not be missed.


Make sure to check out Transcending Obscurity for other great titles and news about Et Moriemur.