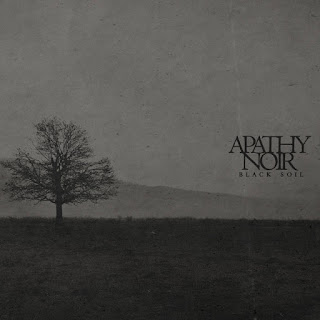 Apathy Noir's doom-like progression is more reminiscent of something like recent My Dying Bride, rather then drawing from too many death or black metal influences – though the vocals of either are here, along with a bevy of tremolo picking, initially. The 'death' bit is more along the lines of melodic death, rather then more traditional death metal examples. Sometimes, Black Soil seems tailored to suit its atmosphere and the music around this isn't really the product of it's creator, Viktor Jonas, trying to fit into any particular subgenre – but rather doing what seems to fit the overall feeling he is going for here. For a good minute, what's being done is scantly definable - it's doomy, it's melodic, it's death and blackened, then a bit of singing thrown in for good measure. For someone who gets rather tired of endless subgenre stacks (I'm sure there are far more people out there then just me) Jonas wonderfully doesn't seem to give a damn, in the beginning.

Sadly, this doesn't last for the greatest amount of time. A couple opening tracks on Black Soil are truly running the gamut of extreme genres, no denying that, but after those are through, everything falls to melo-death. And, for reasons I can't possibly fathom – Black Soil begins to sound a lot like Insomnium, and I mean a lot. This comparison is strengthened by the singing and death metal vocals (provided by the very talented Andy Walmsley), which are well done and never falter in quality, but become purely this for almost the entire album length. This means that Black Soil is essentially stripped of it's more blackened sections, almost never returning to what the album began as. I had high hopes when 'Time and Tide' began, but things fall back again after moments. The album seems to have had a lot of potential for variety and experimentation, but it just never lives up to those beginning tracks ever again. For all that Viktor Jonas seems capable of musically, I don't feel like Black Soil could be considered his magnum opus, not by any means.

There is quite a bit to like here, most certainly for melo-death and doom fans, but it's proposed black metal inclusions are most likely not substantial enough to be more then a light introduction for people unfamiliar with the subgenre. Fans of Insomnium are going to love this, maybe even more then actual an actual Insomnium album – because Black Soil DOES have variety initially.

Check out Apathy Noir on Bandcamp (and a bevy of prior releases) here.